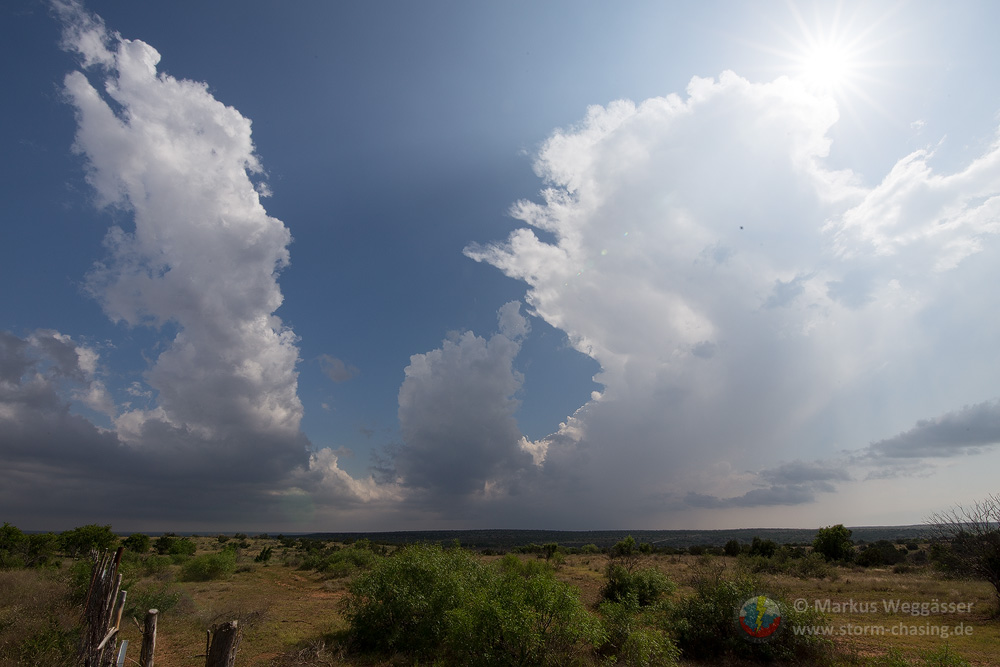 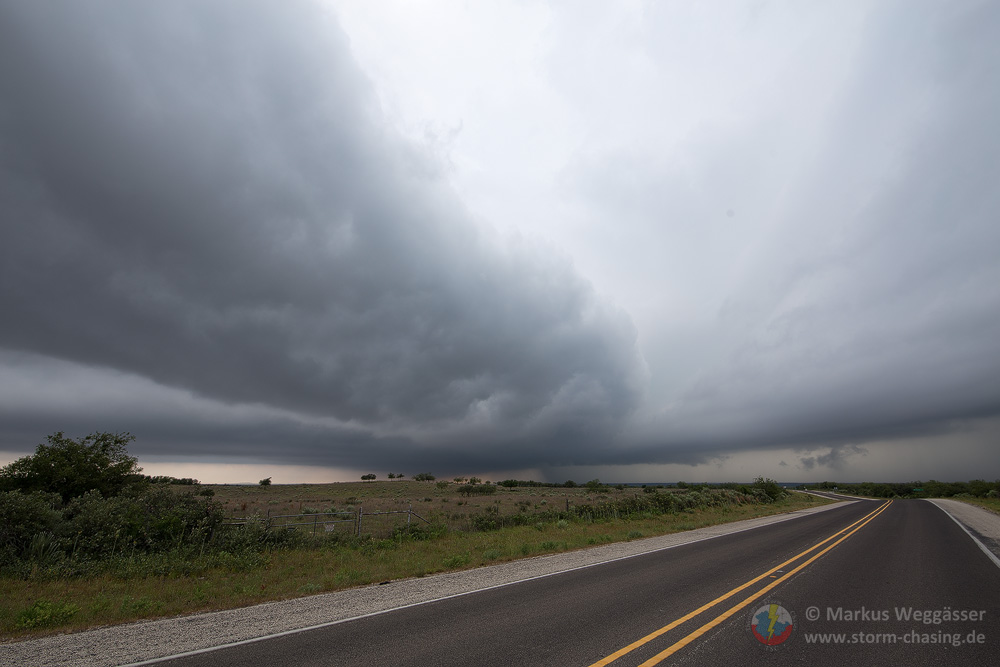 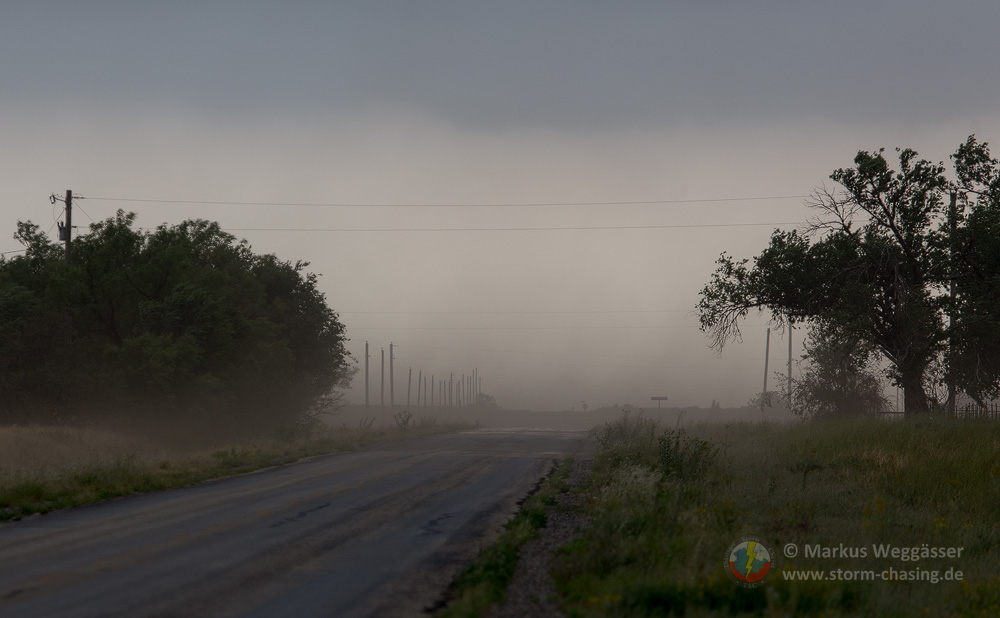 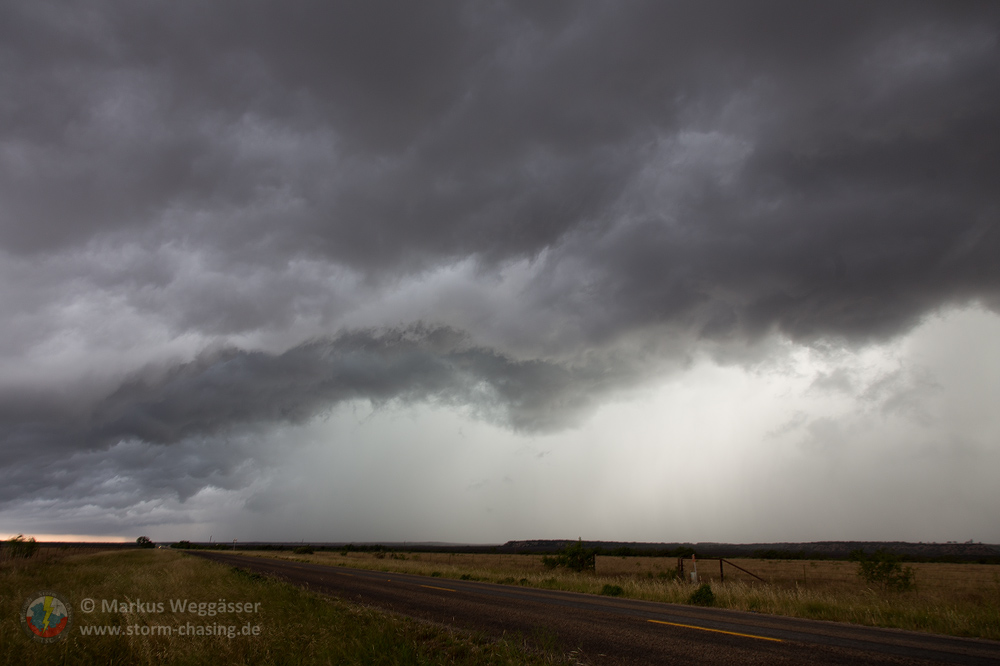 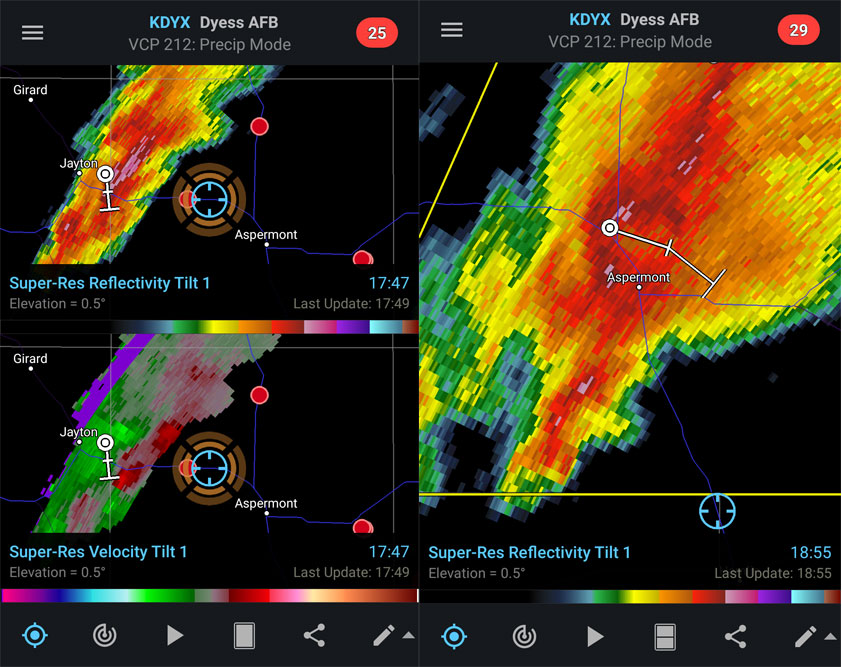 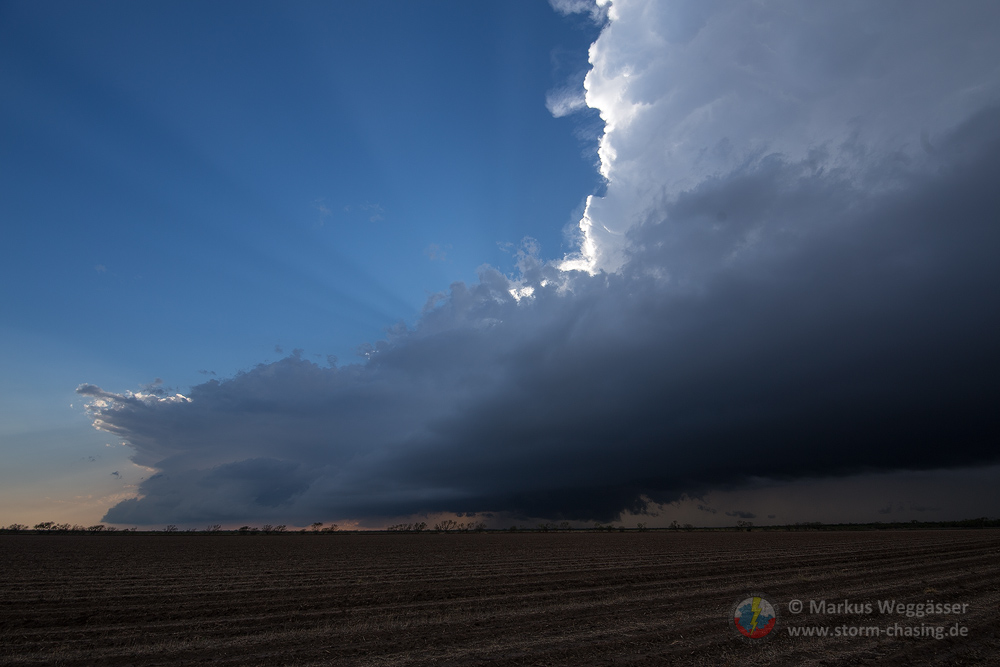 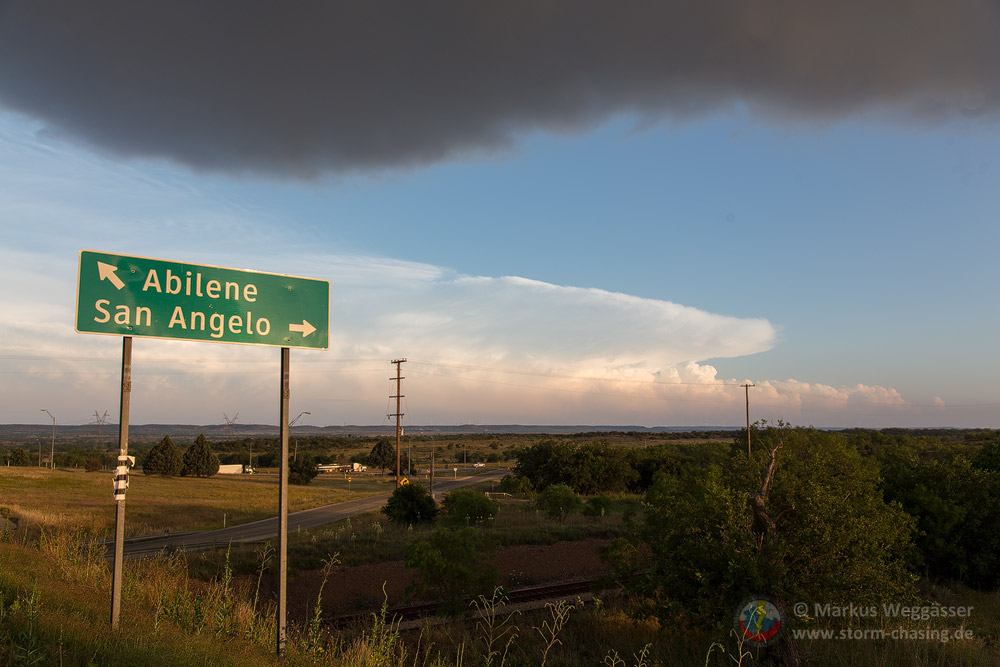 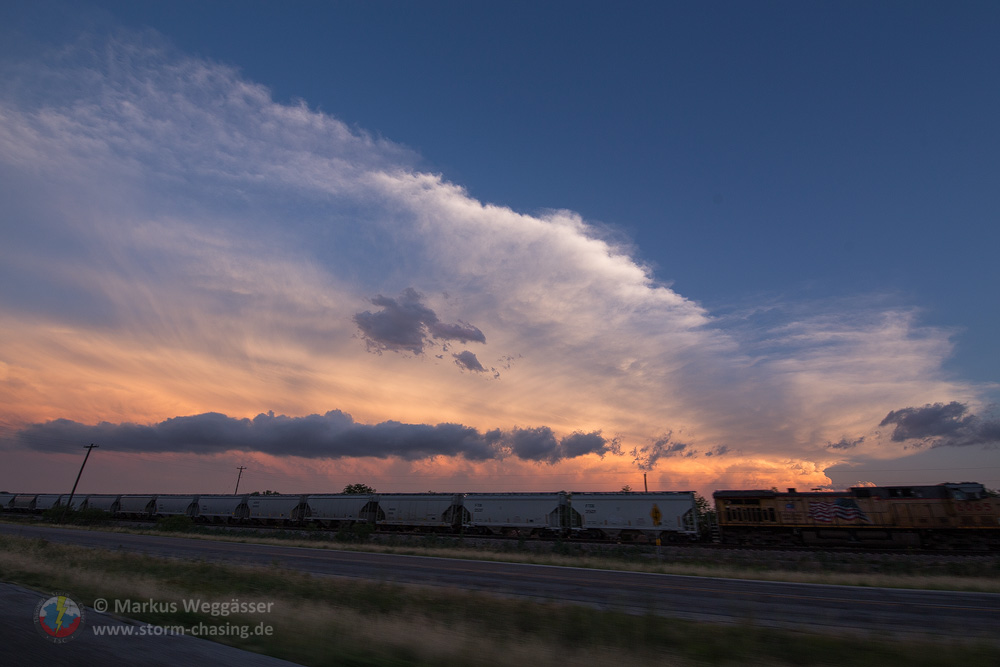 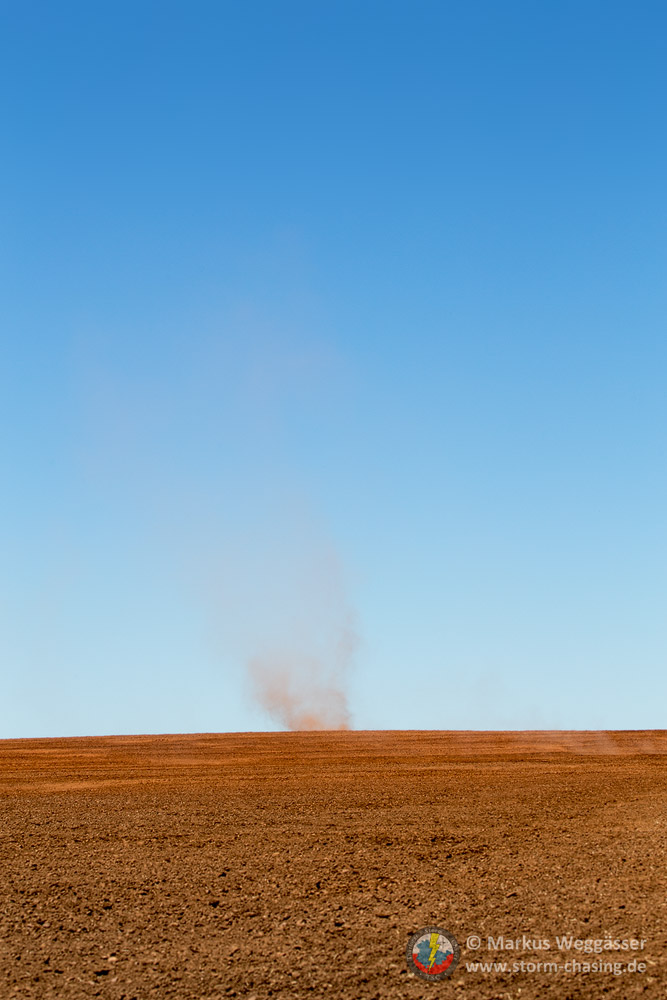 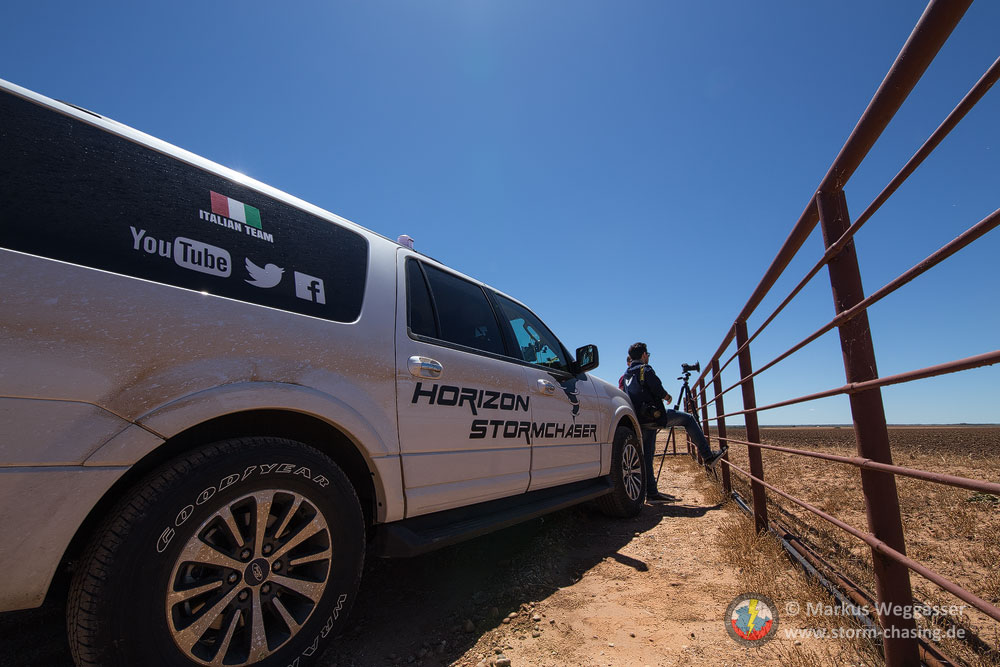 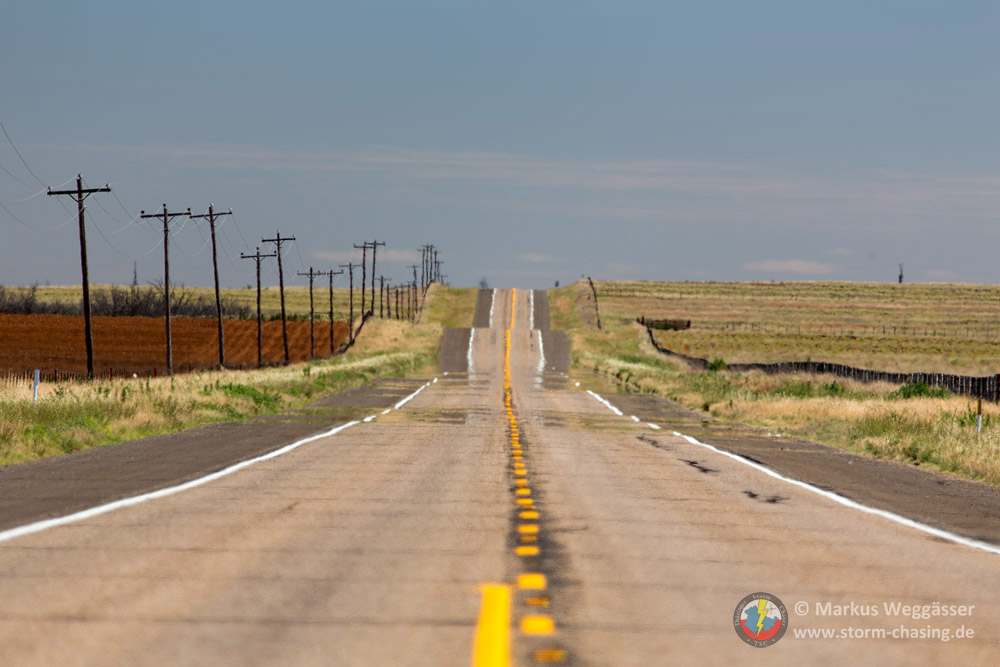 May 19: Waking up, grey skies and light rain welcomed us in the morning. On to the routine check of the weather maps, and a setup we hoped would make for a great chase day had turned into a mediocre joke version of a setup overnight. The rain outside was just the visible expression of what was to blame for the deteriorated outlook.

A line of thunderstorms would keep firing up along the cold front, eating up potential energy for better storms later in the day. That’s what happens if the airmass isn’t sufficiently capped or the synoptic forcing (cold front in this case) is simply to strong to suppress convection.

All we were left with was the hope of some afternoon storms west of the cold front at the dryline. Outflow boundaries and large scale synoptic lifting would help firing up discrete cells with potential for some pretty storm structure.

Four hours later and deep into SW-Texas (Guthrie), we eventually reached the 25 degree barrier and got some sunshine. Clearly, that air wasn’t as warm and buoyant as we would have liked, but it’s not on us to choose. You gotta deal with what you’ve got.

A few attempts of storms to fire later, one cell looked more promising. We positioned ourselves as close to the storm base as possible. Turned out this guy has really managed to find juicy air and sustained forcing. It ingested large amounts of surrounding air into the updraft, causing intense inflow winds which picked up dust from the farm lands around.

There was a second, less active updraft visible, which indicated that it wasn’t too well structured of a storm. While certainly supercellular in character, it didn’t manage to evolve into one discrete cell. While the storm structure was fairly impressive, the storm mode would eventually turn outflow-dominant.

As soon as we got taken over by the cold outflow winds, we moved on, trying to stay far enough ahead of the storm so that we’d get some pretty shots of the developing shelf- or role cloud.

But the storm did lose it’s dynamics rapidly. All we were left with after a while, was a band of clouds which indicated the leading edge of the outflow boundary of our storm. The day ended with a view of towering Cbs and anvils to the west and a sky full of mammatus clouds from the line of storms to the north and west. Abilene, TX is where we decided to spent the night.

May 20: Since cold air has flooded the Great Plains almost in its entirety, no action was forecast for today. We repositioned to Childress where the most enthusiastic group member had some fun with dust devils on our way. For the remainder of the day we enjoyed very fast internet in the motel for once.

What a change when you can actually do some work without the constant pain of waiting, or worse, total loss of connection as is otherwise the default state of motel wireless. An hour before midnight, our last team member for this years trip, Heiko, arrived after a long day on the plane and the road from DFW.